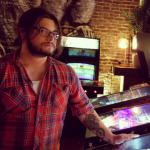 Humans are saddled from birth with the double-edged sword of writing our own stories. From the first sparkling moments of awareness we are faced with a paralyzing morass of choice. We find ourselves bolted in for the performance of our lives, often moving at speeds too fast to consider the gravity of the sharp turns the road may take. The pauses we take in life not only help identify the potentials of transitions as we live them, but also serve to frame the story. Each pause represents a moment of transition, and these are the hashmarks on the yardsticks of […]

In 1915, mathematician Emmy Noether proved that every action within a physical system has an opposite and equal reaction. This was anything but revelatory in the world of spirituality. The religions of our world are infused with the concepts of karma and equilibrium. Enlightenment is for the pure and the balanced. The world of business, too, is premised on profitable relationships, and some degree of balance must be struck before contracts are signed. Every arc of human experience is counterbalanced by extremes; rich and poor, hot and cold, good and evil, light and dark, joy and sadness. From chaos, an […]

We tend to think of our goals in life as a place, a set destination. Calendar dates become oases, the sensations of completing a major project take on an almost physical definition. We follow “roadmaps” to promotion and advancement. These are the reference points many of us use to define our lives. When the word “travel” is entered into a search bar, the computer screen will explode with a full listing travel booking sites, jubilant images of happy little globes, the Eiffel Tower and other wonders, articles that promise the best travel hacks, and hours of highlight-reel videos. Entire libraries […]

The earliest record we have of human creation dates back over 40,000 years ago, to a red disk in a cave in Spain. On the other side of the globe in Indonesia, a few hundred years later, humans stenciled their hands on a cave wall. Roughly 5,000 years later, the first recorded animal depictions began to appear. Human agriculture would start some 20,000 years later, around 9,500 BCE, nestled between the Tigris and Euphrates Rivers. To state that artistic expression is inherent in humanity is a historical fact that predates the bulk of human invention by millennia. Art is the […]

In Rules for Radicals, Saul Alinsky speaks at length about the nature of power. He discusses various instances of creating leverage, thus creating power. One of his central tenets is the idea of not waiting for permission. In the struggle of radicals of any stripe, it’s almost a given that the establishment will be resistant to surrendering any of their power. Those who want to change the world and those who actually do are divided by their level of inventiveness. In every situation, Alinsky argues, there’s a fulcrum point that you can leverage to gain traction, and eventually control. One […]

Vitality, like so many other powerful words, has been diluted in meaning. Everything from skin cream to energy drinks promises vitality. The true meaning of the word is altogether more primal and immediate, and not something so easily commodified into cartoon wings or a portable Fountain of Youth available for only three easy payments of $29.99. Vitality, noun; the power giving continuance of life, present in all living things. Words have power; they are vital to the continuance of thought. Emotions have power; they are vital to what it is to be human. Vitality is not only present at the […]

The concept of team is something that can run as shallow as a jersey or as deep as genetics. It’s based on choreography that’s both brutal and delicate. It’s glued together with strong communication, and it’s built with experience. Your team can be your saving grace in a moment of struggle, the force that pushes you forward to bask in the light of triumph. It’s an open-ended element that refuses to be defined by a table, or stopped by a period. No one person sits at the head of the table. A true team is a free-wheeling exchange of thought […]

Whenever you enter the field of play, it’s usually with some semblance of a goal in mind. Unless you’re hopelessly enthusiastic or a small child, the conceit of being happy just to be there rings a little hollow. Even the most starry-eyed rookie has something in mind when they approach the field for the first time. Getting into the game, let alone the right one, can be hard enough; your industry may be oversaturated with talent and not enough places to put it, or perhaps you’re a big fish in a small pond, whose appetites are grander than your colleagues. […]